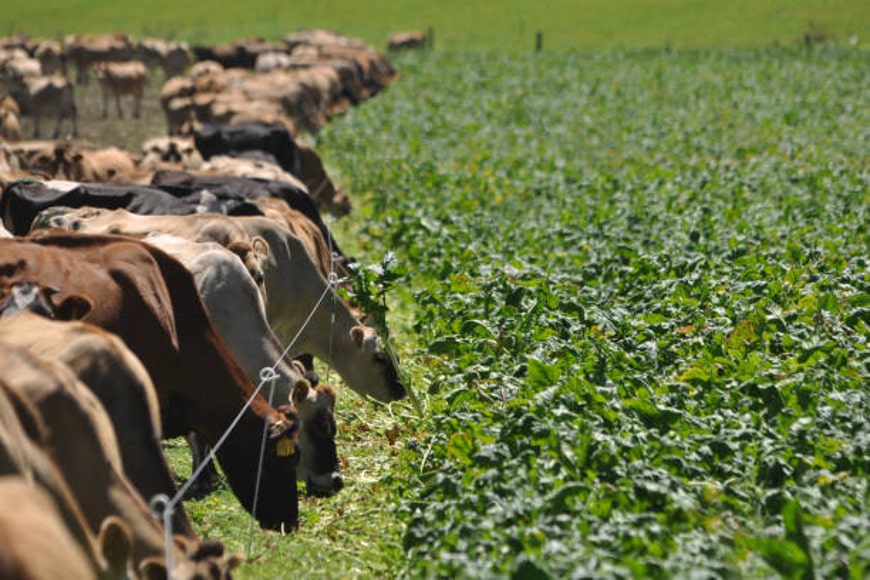 Fodder crops can be classified into temporary and permanent crops. Temporary crops are sown and harvested once or more than once in the same agricultural year. They include grasses, green cereals, legumes like pulses and root crops cultivated for fodder. Permanent fodder crops relate to land use permanently for many years, they are sown or planted once and cannot be replanted after each annual harvest.

For livestock, proper nutrition is a key component that contributes to their growth and development. Whether it’s protein, fibre or minerals, each nutrient is vitally important. They fulfil their roles in growth, providing energy, production and metabolism.

Based on physical structure and nutrient content, the feedstuff including fodder crops are classified into various groups. Most commonly available livestock feed can be included in the concentrates, roughages, and unconventional feed classifications.

Grains are high in energy and relatively low in fibre. They are the seeds obtained from cereal plants. Grains are fed either singly or mixed with high protein meals. Some of them are also processed before they are fed to the ruminants. All cereals are moderately rich in vitamin E and phosphorus. Their crude protein content varies between 8-12%.

Maize, sorghum, wheat, barley, rice, millet, oats and corn are the commonly used grains. By-products of these crops include a variety of feed materials such as harder outer layers of the cereal grains (such as wheat bran and rice bran), corn gluten meal, rice polish, brewer’s grain and other milling by-products.

Oilseeds are crops grown for extraction of high-quality oil from their seeds. The oil obtained from such seeds are primarily used for human consumption, and the residue (oilseed meal and oilseed cake) is marketed as animal feed.

An oil cake is the coarse residue obtained after oil is extracted from the oilseeds, whereas an oil meal is a meal made by grinding oil cakes. These substances are a good source of protein, fibre and energy. Major examples of oilseed crops include sunflower, cotton, coconut, peanut, canola and flax.

Tubers are enlarged plant structures that the plants use to store nutrients. Most tubers are rich in carbohydrates, they are also a good source of energy. Tubers such as potatoes, sweet potatoes, tapioca and carrots can be used as cattle feed.

Roughages include hay, straw, grasses, legumes, tree leaves, stovers, husks and seed hulls. They are high in fibre and low in readily available carbohydrates. Some roughages like legumes are good sources of calcium and magnesium. The protein, vitamin and mineral content in these feed products varies widely according to the plant species.

Most of the roughages are used as fodder when there is not enough pasture for an animal to graze or when grazing is not possible due to unfavorable conditions.

Unconventional feed items are those which are not traditionally used for feeding cattle. They include agricultural by-products and food wastes such as sweet corn cannery waste, bakery wastes, seeds, fruits & their wastes, vegetables & their wastes, plant leaves, tea wastes etc. Such feed products can be a great source of protein and energy. Food wastes such as apple waste, mango seed kernel, coconut pith and by-products of tapioca are some of the unconventional feed utilized for providing energy to the cattle. Protein sources include seeds and seed cakes of various plants.

Different Types of Feed and Nutrition for Laying Ducks-Mash,Crumbles & Pellets
Importance of dairy products in our diet
Advertisement