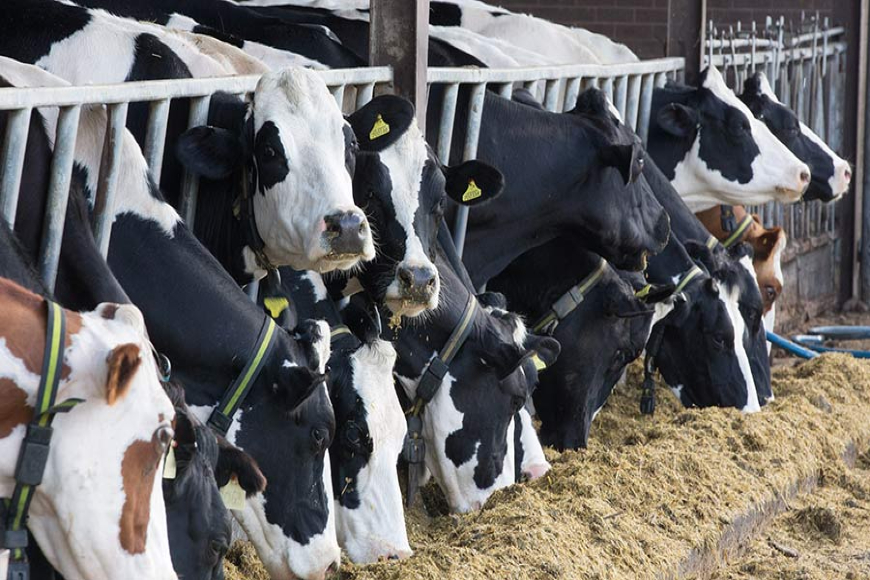 Due to rising population and demands, the livestock industry consisting of beef, cattle, buffalo, goat, sheep etc is slowly becoming a major cause of climate change. This is due to the production of a high amount of methane gas, a greenhouse gas. According to recent studies, more than 90 metric tonnes of methane is released into the atmosphere annually and these animals are the main contributors. Along with this, considering the global warming potential of methane over the past hundred years, which is 25 times more than that of carbon dioxide, it is no surprise that the issue is being raised all around the world.

Countries all over the world are taking measures to reduce the amount of methane released into the atmosphere by adopting sustainable practices.Modifying the feed system is one such practice which can help reduce methane emissions. Some of them are mentioned below.

Feeding a lot of grass to livestock increase methane production since grass contains a lot of fibres which when broken down produce a lot of hydrogen gas which in turn accelerates the formation of methane. On the other hand feeding, corn can reduce this excess production of hydrogen since the breakdown of starch from corn consumes hydrogen to carry out the process. This knowledge should be exploited carefully without compromising the animal’s nutritional requirements. This is done by carefully balancing the amount of grass and corn in feed. Studies show that feeding corn can reduce methane emissions by 10 per cent but one should keep in mind that too much corn can only do more harm than good.

Supplements to slow down methane production

Some feed additives or supplements when added to the feed can reduce the amount of methane production by inhibiting the activity of methanogens. They are generally most effective with hay or grain, especially in cattle farming.

Many types of supplements are being developed like synthetic chemicals, natural supplements like seaweed and tannins, fats and oils etc. Some of these supplements have shown methane reduction ranging from 10 per cent to 99percent which is very promising. Some of these additives are,

Asparagopsis taxiformis commonly known as red seaweed has been extensively studied in the past years and have shown unprecedented efficiency in reducing methane emissions. Studies have shown that mixing red seaweeds with feed reduced the amount of methane production by a jaw-dropping 90 per cent. This efficiency is shown when the supplement quantity in the daily diet is less than one per cent. Scientists are carrying out large-scale trials to make the product more accessible to the farmers.

Another effective method commonly used by farmers to reduce methane production is the inclusion of fats and oils in the animal’s diet. Among them,the medium chain and polyunsaturated fatty acids prove to be the most effective. Fatty acids are known to suppress methane formation by different means like reducing fibre digestion, lowering dry matter intake, direct inhibition of microbes like methanogens, suppression of rumen protozoa, decreasing organic matter fermentation and biohydrogenation of unsaturated fatty acids which serves as a hydrogen sink. Studies have shown that there is a reduction of methane production by 5 per cent for every one per cent increase in fat content in the diet.

This fat content can be supplied by the addition of different vegetable oils like soybean, coconut, rapeseed, sunflower, canola, linseed etc in the animal’s diet.

4. Use of lipid by-products

Lipid by-products are another unconventional feed that is known to reduce methane emissions. They are the high oil by-products from large biofuel industries like distillers or mechanically extracted oil seed meals. They are natural and are proven anti-methanogens which are known to reduce methane emission by up to 25 per cent as compared to barley.

Also, glycerol, a major by-product of some bio industries has shown excellent properties that can reduce methane emissions.

Tannins are a kind of plant secondary metabolite belonging to a chemical bioactive compound group. They are plant polyphenols with varying molecular sizes. There are two types of tannins that exist in plants-

hydrolysable tannin and condensed tannin. Tannins are generally used as feed supplements and are known to reduce methane emissions by 20 per cent.

They are known for having a direct effect on the rumen’s methanogens and indirectly suppressing feed degradation to reduce hydrogen production.

Hydrolysable tannins are the ones known to directly inhibit methanogens and condensed tannins do their job by lowering fibre digestion.

Saponins are a kind of surface active glycosides seen in many plants, both wild and cultivated. They are known to reduce methane production by directly inhibiting methanogens in the rumen and also by inhibiting protozoa. Although the concentrations required for both methods are different, i.e, the concentration required for suppressing methanogens is considerably greater than that required for inhibiting protozoa. Saponins function by limiting the hydrogen availability to methanogens and reducing the amount of hydrogen- producing bacteria with their anti-bacterial properties. Unextracted plant saponins, provided in the form of leaves can achieve very efficient methane emission values.

The addition of dietary oils in ruminant feeds can reduce the production of methane gas by 25 per cent. Essential oils are known to suppress methanogens and increase the acetate-to-propionate ratio thereby reducing the amount of total hydrogen gas available. Supplementing essential oils like garlic oil, cinnamon oil, anise oil and hot peppers can reduce the amount of methane production by increasing the acetate-to-propionate ratio. Japanese horseradish and mustard oil also contain compounds that can reduce methane production.

There are three ways by which yeast culture can reduce the amount of methane emission.

 Simulating acetogenins to compete with methanogens to metabolise

However, these effects of yeast culture are greatly diet dependent.There are many live yeast additives available in the market that can provide you with considerably low methane emissions.

While talking about methane-reducing feeds, a livestock enterprise’s main aim should be to make a profit. So the selection of methane-reducing methods should be in accordance with your budget. In that sense, the most effective method for reducing methane emission is to balance and manipulate diet to obtain optimum efficiency. Moreover, due to the ever- increasing seriousness of the issue, extensive studies are being carried out all around the world to create efficient and affordable methane-reducing feeds readily available. The advancement in the research on supplements like red seaweed (Asparagopsis taxiformis) and tannins is very promising.

What to feed a rabbit after giving birth?
Sustainable methods of cattle farming
Advertisement