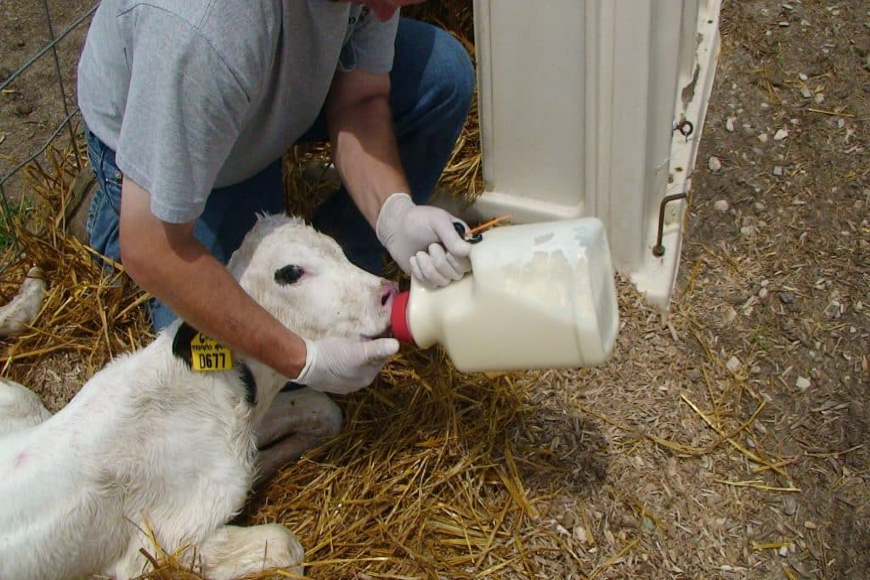 In any dairy enterprise, newborn calves demand extreme care and individual attention. It is mainly because they are vulnerable at that point due to many factors. So, it is important to take good care of the newborn bovines since it is directly or indirectly linked to the quantity and quality of milk produced in the herd. The vulnerability of the calf is a hundred times greater during the first few hours after birth because at this point the calf has no antibodies in its body and doesn’t have any immunity. This is where the importance of colostrum starts.

Colostrum is simply the first milk produced after calving. It is generally thick and yellow and contains a large number of vitamins, nutrients, antibodies and many other nutrients with anti-microbial activity and growth factors. Essentially, it can be considered as a type of reinforced milk composed of vital nutrients and antibodies.

Why is it important?

As mentioned above the calves right after birth is in a highly vulnerable state due to the lack of immunity. Colostrum can give the calf adequate immunity in the form of immunoglobulins and other antibodies. Since colostrum is a hundred times richer in these vitals, it greatly helps the calf’s healthy growth and development. Colostrum is also rich in amino acids, carbohydrates, fats, and water-soluble vitamins like vitamins A, D, E, K and B.

Even though the amount of the main carbohydrate lactose found in regular milk is low in colostrums when compared, it is rich in dietary oligosaccharides which are known to have many bioactive properties. They also play an important role in gut health and act as prebiotics while protecting against pathogens in the newborn’s gut.

Studies have shown that colostrums contain a higher concentration of minerals than regular milk. It contains a large amount of calcium, phosphorous, and considerable quantities of magnesium, zinc, and selenium. Since calcium plays an integral part in bone and teeth development and phosphorous is vital in the calves’ metabolic activities, colostrum plays an important role in the supply of these minerals.

All these nutrient factors of the colostrum help the calves in the following ways:

Other anti-microbial factors of colostrum

Good management and feeding of colostrum can bring about some financial benefits too.

Studies have shown that calves with higher immunity show a better weight gain in a given period than a calf with low immunity. Also, the high immunity in calves is connected with a better feed conversion ratio. This means that the calves can utilize the maximum from a given amount of feed. Considering the feed cost in today’s market provides a great financial benefit. Recent studies also say that the mortality rate for calves with high immunity is around 8% while it goes up to 20% for those with low immunity. Since immunity in calves is directly connected with colostrum intake, one cannot argue about the financial benefits of colostrum.

The importance of colostrum is also dependent on the timeline of birth. The newborn calves generally require about five per cent of their body weight in colostrum during the first four hours ( ideally within 30 minutes) after calving and about one litre of colostrum in the first twelve hours and then in 24 hours. This is very important while feeding colostrums because during the first 24 hours after birth, the intestines of the newborn calf can accept the antibodies, supply them directly into the blood, and help fight against infections. This is not possible after that.

The most efficient way to feed colostrums is to let the calf suck the dam after birth. In some cases, this might not be possible because of the calf’s poor health or the dam’s condition. In such situations, colostrums can be collected by milking the cow right after birth and can be manually fed to the calf.

Another important thing to note is while collecting the colostrum make sure it is of good quality. Cows in their third lactation or above generally produce good quality colostrums. The quality of colostrum can be confirmed by its thick creamy and yellowish appearance.