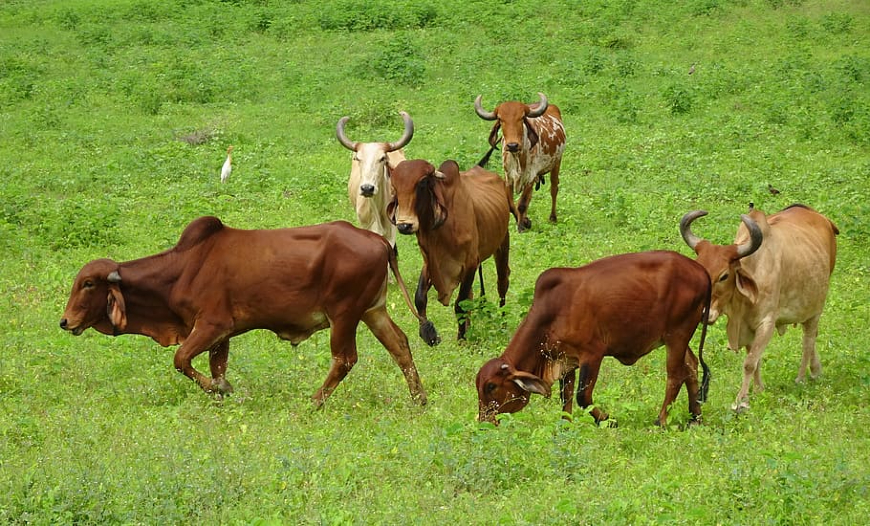 and livestock sectors. India also ranks among the top producers of many agriculture and livestock-related products. For instance, India ranks first in the production of buffalo milk. In a country which gives much importance to bovines, especially cows, it is no surprise that we can find a large variety of

cow breeds. The diverse biodiversity of the subcontinent also plays an important role in creating or sustaining different breeds. India has over fifty well-defined cow breeds, which have evolved with generations providing different qualities with different breeds. Some breeds have a better immune system, while others are high dairy producers. Although all of them have adapted to the harsh tropical climate.

Cow breeds in India can be classified into three different types:

Drought breeds: Drought breed cows are usually poor milkers and produce 500 kg or less milk per lactation period. But they are excellent workers and can do many demanding tasks. For example, two draught bred bulls can haul up to 1000 kg at 5 to 7 km/hr and double the load with rubber wheels.

Dual-purpose breeds: As the name suggests, these breeds are a mix of both worlds. They are usually average milkers and can do a considerable amount of

work. These breeds generally produce 500 to 1400 kg of milk per lactation period.

Most popular dairy breeds in India

This breed is also known as Kathiawari, Gujarathi, Surati, Sorthi and Desan. They are indigenous dairy breed cows that can produce 1200 to 1800 kg of milk per lactation period. They have characteristic curved horns that resemble a half-moon and are generally found in white and chocolate brown or purely red or black skin colours. Fully hung ears are also a characteristic feature of these breeds.

Gir breed of cows got its name from its place of origin- the Gir forests of South Kathiawar in Gujarat. Being exposed to a large period of scarcity in their region, Gir breed of cows has developed high-stress tolerance and can produce large milk yield with considerably low feed intakes. The Gir breed has also developed high immunity to certain tropical diseases due to these factors. All these combined made this breed a favourite in other tropical countries like Brazil, Venezuela and Mexico.

Red Sindhi, also known as red Karachi or Sindhi, is a heat-tolerant milch breed cow. Although the origin of this breed goes to the Sindhi province in present-day Pakistan, these breeds of cows are also seen in many parts of Orissa, Tamil Nadu, Kerala and Assam. This breed of cattle is believed to be evolved from the Las Bela cattle breed of Bela, Baluchistan. They have a distinct dark red colour with occasional white patches on the head. They have lateral horns, thick at the base and curved upwards. They are excellent milk producers and can produce from 1100 kg to 2600 kg of milk per lactation, with an astonishing average figure of 1840 kg of milk per lactation.

The Sahiwal breed, also known as Lambi bar, Lola, Montgomery, Multani or Teri, is undoubtedly one of India’s best milch cattle breeds. This breed of cattle has its breeding tracts in the Ferozpur and Amritsar districts of Punjab and the Ganganagar district of Rajasthan. They are most commonly used for specialized dairy purposes. They have a distinct brownish-red colour with shades ranging from mahogany red-brown to greyish red with occasional white patches. They generally have shorter horns and are excellent milk producers. Their numbers

Rathi breed of cows is also an important dairy breed cattle breed found in India. They are mostly found in the arid regions of Rajasthan. They have their name derived from the pastoral Muslim tribes in Rajasthan known as Raths. The breeding tract of this breed is spread out through the districts of Bikaner, Ganganagar and Jaisalmer in Rajasthan. They have a characteristic brown colour with white patches all over the body or maybe completely brown or black. They are excellent milk producers with milk yield ranging from 1062 kg to 2810 kg per lactation period with an average number of 1560 kg per lactation period and can stretch up to 4800 kg per lactation period under organized farm conditions.

Most popular drought breeds in India

The Hallikar breed, also known as the Mysore breed, is one of the best drought breed cows found in the southern part of India. The Hallikar breed has its breeding tract in the Mysore, Bangalore, Mandya, Kolar, Hassan, Tumkur and Chitradurga districts of Karnataka. Their skin colour ranges from white to light grey, with horns emerging near each other, pointing upward and back till half-length and then slightly forward at the ends. The farmers usually follow a semi-intensive management system which gives an average milk yield of 542 kg per lactation period.

Amritmahal, also known as Doddadana, Number dana or jawari dana, is an important breed of drought or transport cattle. Amritmahal has its breeding tracts in Chikmagalur, Chitradurga, Hassan, Davanagere, Shimoga and Tumkur districts of Karnataka. They have a characteristic grey colour which can vary from white to black in some cases. They have horns that emerge from the top ( fairly close to each other), growing upwards and curving inward at the ends. They are known for their strength and endurance making them one of the best draught cattle breeds. They are usually used as transporters and have poor milk yields.

Khillar cattle is a highly capable draught breed cattle with its breeding tracts in different parts of Karnataka and Maharashtra. They are also known by the names Shikari, Mandeshi or Thillar. They have closely placed horns which point up and backwards in the first half and then to the front with a thick base and pointed end. Their bulls are high endurance strength and fast draught animals. They are known to haul heavy weights long distances without any signs of fatigue. However,these breeds have a very low milk yield of 451 kg of milk per lactation period.

Kangayam, also known as Kanganad and kongu, is a draught breed of cattle found mainly in Tamil Nadu. Kangayam has its breeding tracts in Dindigul, Coimbatore, Karur, Namakkal and Erode districts of Tamil Nadu. This breed has a characteristic white or grey colour with dark markings on its knees. Its dark eyes can also be considered acharacteristic of the breed. Kangayam has horns which point upwards, backwards and then inwards forming a crescent shape. The highly capable draught animals are maintained in a semi management system and are excellent for heavy hauling and agricultural purposes. They have a low milk yield of 540 kg per lactation period.

Hariana breed is one of the most popular dual-purpose breeds found in India. As the name suggests Hariana has its breeding tracts in Haryana. They have their breeding tracts in Gurgaon, Jind, Sonepat, Rohtak and Jhajjar districts of Haryana. They are generally white or light grey and have small horns and coffin-shaped skulls. They are excellent work animals with a fair yield of milk. The milk yield of Hairana cows ranges from 693 kg to 1745 kg per lactation period under optimum conditions.

The Kankrej breed, also known as Talabda, Nagar, Bonnai, Vagadia and Wadad, is a dual-purpose cattle breed from the Banaskantha district in Gujarat. The Kankrej breed of cattle is famous for its high resistance to tick fever, contagious abortion, heat stress and tuberculosis. They are found in colours such as silver grey, iron grey and steel black. The Kankrej bulls are generally darker than their cows and bullocks. Their large ears can be used as an identifying feature along with their lyre- shaped horns. They are excellent workers and are commonly used for agricultural and transport purposes. These cows also have an average milk yield of 1738 kg per lactation period which can extend up to 1800 kg or even 4900 kg under optimum conditions.

Ongole, also known as the Nellore breed, is an important dual breed of cattle found in the state of Andhra Pradesh. It has its name is derived from the geographical location of its origin. Ongole breed has its breeding tracts in Guntur, Ongole, Nellore, Kurnool and Godavari districts of Andhra Pradesh. They are known for their high endurance, disease resistance and ability to survive on scarce resources. Ongole breed cattle have a characteristic glossy white colour with occasional dark patches on the heads of males. They have horns which are short and extend backwards with a thick base and pointed ends with no cracks. They are good workers with an average milk yield of 798 kg per lactation period.

Badri, also known as Pahadi, is a dual-purpose breed found in the hilly ranges of Uttarakhand and hence its name. Badri has its breeding tracts in Almora, Bageshwar, Champawat, Pauri Garhwal, Rudraprayag, Nanital, Chamoli and Uttarkashi districts of Uttarakhand. They are most commonly seen in black or brown colours and are rarely found in white colour. They have horns which are curved upward and inward. They are strong draught animals that can be used for power and provide a satisfactory milk yield of 632 kg per lactation period when maintained in a semi-intensive management system.